Eric Johnson is one of the most influential guitar players of our time. Tunes like “Cliffs of Dover” and “Manhattan” opened thousands of minds with his pentatonic awesomeness, his violin-like tone and unique style of playing.

Eric Johnson also shared quintessential contribution to modern guitar soloing with the use of string skipping to imply harmonic contours that are independent of his rhythm section.

Eric Johnson effectively does this via vertically stacked triads that span the fretboard, also known as drop-2 chords. A drop-2 chord is created by taking any close-voiced chord (where all three notes are within an octave) and lowering the second-highest note by an octave. In Fig. 1 you can see how this process works with three inversions on string set 5-4-2. Move these voicing to string sets 6-5-3, 4-3-1, and 5-3-1 for all major, minor, and diminished triads (if you’re bold), and then memorize the shapes of each to master them.

Now that you know how Eric Johnson visualizes the fretboard, let’s take a look at how he applies this to some actual music. When his “Cliffs of Dover” became a widespread phenomenon, attracting musicians and listeners alike, Eric Johnson began extending the live intro by delaying the recorded intro’s identifying statement. Eric Johnson did this by using drop-2 chords to play chord melodies over a synthesized G pedal.

Fig. 2 is a free-time, voice-leading idea in the key of G, where the chord’s melody is the top note while the bottom notes move in intriguing counterpoint. The harmonics in measure four are played by fretting the G6/9 chord while picking the appropriate string with your thumb as your index finger gently touches the harmonic above the fret in parentheses. 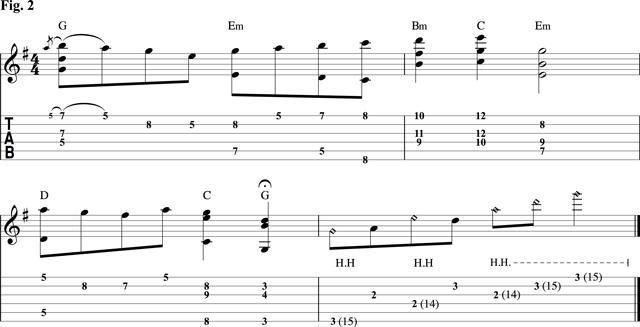 Learning these licks will help you advance your playing style in no time, especially if these techniques are new to you. Keep exploring new things and learn styles and techniques!

If you want to learn more, or if you have any questions or suggestions, feel free to post on our EXCLUSIVE Members-only Facebook Group or send us a Tweet with the hashtag #GZRockinRiffs! 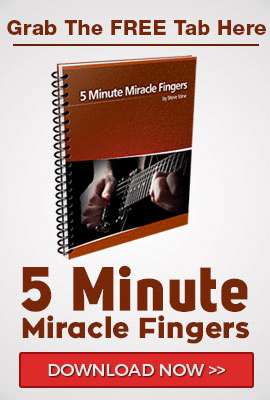