Arpeggios are simply the notes of a chord played separately rather than together. They’re useful for adding depth and color to your licks and solos, no matter what style you play.

Whether you’re playing over your favorite classic rock tune or busting out a lightning fast metal solo, arpeggios will give you the “wow” factor to stand out from other guitarists and make any audience take notice.

This style of playing originated from classicists of Classical/Baroque era. Great musicians such as Wolfgang Amadeus Mozart, Ludwig Van Beethoven and Franz Schubert are famous for composing songs that have lots of challenging arpeggio runs. Up to this day, arpeggios are heard in many genres like metal, progressive rock, and of course, neo-classical metal. Notable modern guitar virtuosos who use lots of arpeggios are Yngwie Malmsteen and Jason Becker.

Here, you’ll discover some of Steve Stine’s coolest arpeggio licks and how to use arpeggios effectively in different playing situations.

Finding a single key’s arpeggio run is quite easy once you get a good grasp of Octaves. Octave is what you call a single same note of a key. It comes from the word “Oct” or “Oc”, which means “Eight”. Simply counting eight keys from the root note using its major scale (C, D, E, F, G, A, B, C) will lead you to its octave. Being familiar with this will help you improve knowledge when creating an arpeggio lick.

There are tons of ways to play arpeggio solos. The most common way is by “Sweep” picking, where you’ll make a sweeping motion with your right hand, following where your left hand goes. Arpeggios are mostly in vertical pattern, where the “Sweep” technique gets efficient. In this first arpeggio lick, we will use a bit of hammer-ons and pull-offs. This arpeggio also skips one string, so be careful when switching from the third string to the first string. You can use this form in different keys on the fretboard, just like what Steve did in this first lick.

The second lick is an A Minor arpeggio in high register. For this one, you can also try to go back to the lick’s first note (A), following the same notes, but using a pull-off from the 17th fret to 12th fret. You can also add some juice to it by tapping the 20th fret after hitting the 17th fret.

Lick number 3 is the easiest one in this video since you’ll just have to use two strings, plus, it’s repetitive. You can try making some changes to it by changing these notes’ sequence. 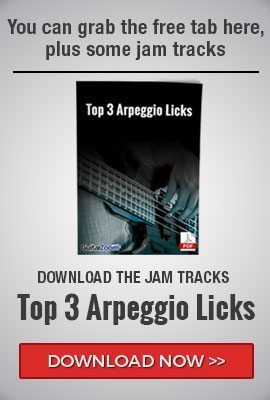