Nothing compares to a good lick—and a good lick done well at that. Last week, our resident guitar maestro Steve Stine released some amazingly fun sets of riffs on Wicked Lick of the Day, Live on Facebook—where you can learn to play alongside Steve’s easy-to-follow tutorials jampacked with ultra-helpful tips on how to improve your performance and master those great tracks, making your daily practice, practice, practice more fun, fun, fun.

The WLOTD audience is growing—and we have YOU to thank for it! We appreciate all the love, shares, and comments from each and every one of our viewers and encourage you to keep tuning in Mondays through Fridays, 3pm Central on Facebook Live—Steve will always have fun, fresh licks for you to try out.

Steve made a comeback from his sickbed and gave us a rundown of one of his favorite good old rock and roll riffs, from the 1989 Kix single Blow My Fuse.This track comes from the glam metal band’s breakthrough record under the same name, earning Kix a platinum record and placing itself firmly on the no. 46 spot on the Billboard Charts in the same year.

This particular lick comes from the underrated yet super fun track, Muscle of Love, by the Alice Cooper Band. This catchy riff may not be top of mind when it comes to playing or practicing, but if you’re looking for a timeless lick to have loads of fun with, this one’s definitely for you.

The funky and groovy Lenny Kravitz is Steve’s main man in this episode, with the fun-to-play single from his 1991 album Mama Said, Always On the Run. This track is actually a collaboration between Kravitz and Slash from Guns N’ Roses, initially meant for the band’s studio album—and now it’s on Guitar Hero: Aerosmith.

On June 2, it will have been 30 years since Metallica unleashed the 1986 track Master of Puppets, from the critically-acclaimed studio album with the same title. This song is one of Steve’s picks to play to up his speed when he was younger, and focuses on the extensive use of downpicking. Great for those looking for a challenging lick to practice on.

Get your Wicked Lick of the Day fix and learn to play your favorite riffs with Steve!
Join Steve Stine and other guitarists learn a new guitar lick Mondays through Fridays on Steve’s channel. Sign up to our newsletter to get a reminder to catch WLOTD Live and get the download links for the tabs. You can sign up anytime, we won’t spam, promise. 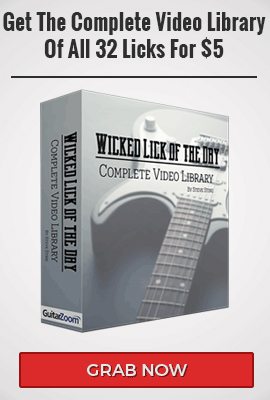